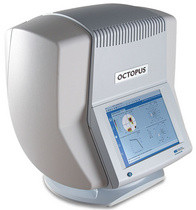 With the Octopus 600, Haag-Streit has introduced a new perimetry technology that makes use of a TFT-based monitor to produce stimuli and background. This allows the instrument to display complex stimuli such as Pulsar, which would otherwise not be possible with cupola-based or projection type perimeters. Combining both Pulsar early glaucoma detection and standard white-on-white perimetry, the instrument is capable of covering the most important stages of disease progression, allowing for early diagnosis and follow-up.

Early diagnosis and standard white-on-white perimetry in one device.

Various studies over the past decades have shown that contrast sensitivity and flicker sensitivity are af- fected in glaucoma. The Pulsar method combines both by presenting a contrast-modulated ring target that flickers at 10 Hz in counterphase, resulting in the method of choice for early glaucoma detection.

The same, easy to use EyeSuite® software already known from the Octopus® 900 has been further streamlined to operate the Octopus® 600. The intuitive concept of both the examination and viewing screens are the key components of the new touch screen optimized user interface.

Results can be analyzed on the device immediately after the examination is finished or sent to a printer, EMR system or DICOM server. The Octopus® 600 can produce reliable visual field results with minimal user training and it doesn’t take an expert to run a reliable field.

The streamlined workflow increases patient throughput while still making use of proven Octopus® concepts such as fixation control to obtain reliable results.

Pulsar is a patented flicker stimulus, displaying a ring pattern with different contrast levels in counter-phase. Independent studies confirm, the test is easy – even pleasant – to take, while being both sensitive and specific in the early detection of Glaucoma.

Unlike other early diagnostic methods that challenge the patient with hard to distinguish answering criteria, Pulsar requires no more than a simple click for every target that appears. Invented in 1998 by Prof. González de la Rosa, the method has been extensively validated and refined to result in today’s „Pulsar T30W“ test. Haag-Streit provided this new method to independent research groups. The results were very convincing. Consequently, Haag-Streit has created a new perimeter based on this exciting method for early glaucoma detection: The Octopus® 600. 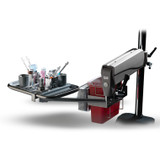